How is antibiotic resistance evolving?

Throughout the world, the most common pathogenic bacteria are becoming increasingly resistant to one or even several classes of antibiotics.

Since 2014, the Swiss Centre for Antibiotic Resistance (ANRESIS) has been monitoring the evolution of bacterial resistance in Switzerland, with special attention to those bacteria considered most dangerous for public health. Thanks to voluntary declarations by a network of laboratories, this center is able to maintain an interactive database that can be inspected online www.anresis.ch.

Compared with other countries, Switzerland has an intermediate position regarding antibiotic resistance. Relative to its population, the number of infections due to resistant bacteria here is lower than in France, Italy or Great Britain, but higher than in the Netherlands or the Scandinavian countries.

The data accumulated since 2004 show mixed results: antibiotic resistance has increased strongly in some species of bacteria and has decreased or remained stable in others. For Escherichia coli – frequently involved in lower tract urinary infections – resistance to fluoroquinolones (a commonly used class of antibiotics) has increased, as has resistance to another class of broad-spectrum antibiotics (3rd and 4th generation cephalosporins). For Klebsiella pneumoniae, potentially responsible for urinary tract and respiratory tract infections, resistance similarly increased until 2014. However, this appears to have stabilised in recent years. The reasons for this stabi-lisation are still unclear, and are now being investigated in more detail..

The proportion of vancomycin-resistant enterococci has remained stable but has increased since early 2018. Unfortunately, its presence in a hospital can lead to the cancellation of some surgical operations.

Infections due to penicillin-resistant streptococci – which can cause pneumonia, for example – have probably declined thanks to vaccination, since the vaccine also protects against antibiotic-resistance streptococci.

The proportion of invasive infections caused by methicillin-resistant Staphylococcus aureus (MRSA) has also decreased, thanks to improved detection and rapid treatment of infected patients in hospitals.

Evolution of the main resistant bacterial strains in Switzerland 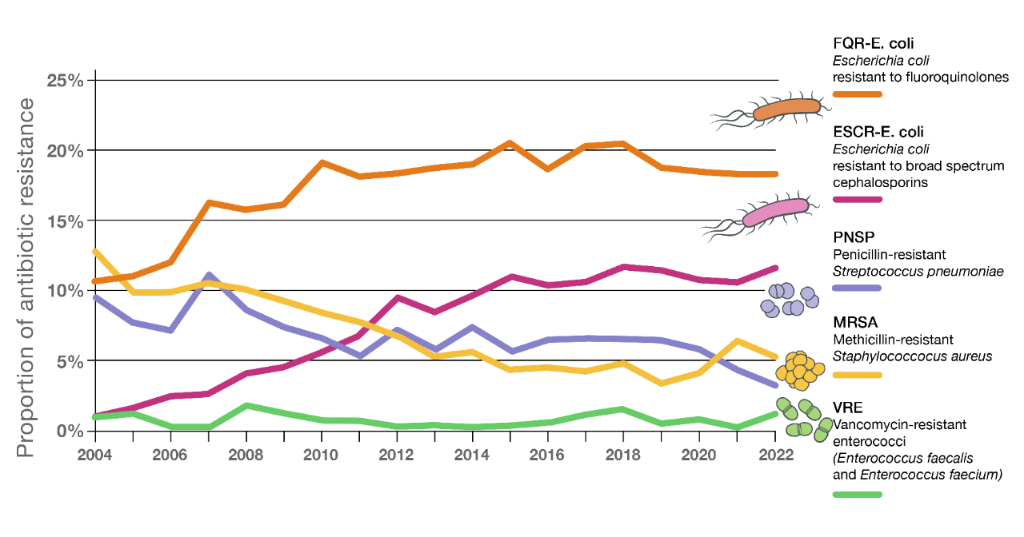 Antibiotic resistance at the global level

Throughout the world, the most common pathogenic bacteria are becoming increasingly resistant to antibiotics. Among the most worrying are the strains of enterobacteria (e.g. Escherichia coli or Klebsiella pneumoniae, which are common in the human intestinal tract), which are increasingly becoming multi-resistant.

Around ten years ago, experts were most worried about so-called ESBL resistance, i.e. resistance towards a large group of antibiotics related to penicillin). In order to treat infection with such bacteria, they could use a more recent class of antibiotics called the carbapenems. But since then, many bacteria have also developed resistance against this new series of antibiotics too (for example, thanks to very efficient resistance enzymes NDM-1 and KPC). Since 1 January 2016 it is therefore mandatory in Switzerland to report Carbapenemase-producing Enterobacteriaceae (CPE).

Due to this worrying development, doctors saw themselves forced to prescribe polymyxins (particularly colistin) – an old class of antibiotics that had gone out of use because of adverse effects including kidney damage. In late 2015, a new type of resistance to colistin was discovered that could be easily exchanged from one bacterium to another. Responsibility for this is down to a gene called mcr-1, which is located on a plasmid rather than in the bacterium’s chromosomes). It is therefore becoming very difficult to find a way of treating patients whose bacteria are resistant to polymyxins.

Bacteria that are becoming resistant to antibiotics – and which therefore represent a current or existing threat to public health – are monitored. These bacteria include Carbapenemase-producing Enterobacteriaceae (CPE).