In Switzerland, more than 100,000 people are exposed to radiation in the course of their work. This corresponds to about 2% of the working population that must be reliably protected from ionising radiation.  This includes individual monitoring of the radiation dose absorbed. 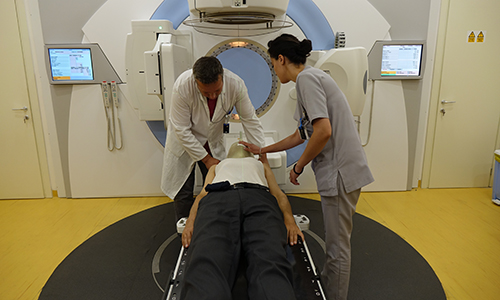 Anyone who is at risk of increased radiation exposure during work or training is considered to be an occupationally exposed person. In the area supervised by the FOPH this applies, for example, to people operating an X-ray machine or handling radioactive substances in hospital or in research.
The accumulated radiation dose must be monitored individually by a recognised dosimetry laboratory. In the case of external radiation such as from X-ray equipment, this is usually done with portable dosimeters. If there is a risk of ingesting radioactive substances, measurements are taken directly on the body (triage measurements) and, if necessary, supplemented by more precise measurements (urine or whole-body counter). A proven method for flight personnel is calculating doses on the basis of the flight route.

If elevated doses or limit exceedances are detected, the FOPH conducts an investigation together with the establishment concerned. The idea is to avoid or at least reduce further doses by means of radiation protection measures. Establishments have a fundamental obligation to optimise protection from radiation, meaning that doses and probabilities of exposure must be reduced as far as possible and reasonable.

The FOPH maintains a Central Dose Registry (CDR). Here the results of the dosimetry of each occupationally exposed person have been recorded since 1989. This information can be used as the basis for clarifying potential insurance claims. The CDR is also used for supervisory purposes. On the basis of the CDR, statistics are compiled annually and published in the annual dosimetry report of the supervisory authorities.

The number of occupationally exposed persons in Switzerland has increased by almost 60% in the last 20 years, while the total dose of all persons monitored (collective dose) has remained relatively stable. About two-thirds work in the medical sector, which is also where most of the limit exceedances are currently found. They mostly have to do with the ocular dose of people performing procedures involving fluoroscopy in cardiology or interventional radiology.